The early Bank Holiday Monday saw a number of Istead Runners compete in the Ted Pepper 10k, which was also a SCVAC Southern Counties Event.  Starting on the track at Norman Park, it featured some  tricky off-road sections which needed to be carefully negotiated – several runners took tumbles but fortunately no Istead runners! 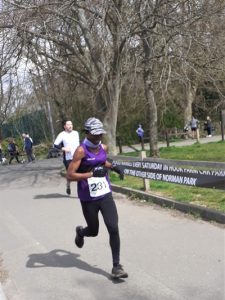 Father and son Lee and Bailie Marsh were not competing in the Southern Counties competition and clocked times of 51:49 and 48:38 respectively.

8th May was a very wet and windy day but nevertheless some brave souls ventured out with Matt Holt completing the tough Bewl Water Half Marathon in 1:41:24.  Meanwhile Barry Marsh and Jeremy Horton completed the 22k Maverick trail, with Penny Marsh and Hannah Horton opting for the 11k course.