In accordance with government and England Athletics advice as we move out of Lockdown 3, it is again possible to resume group sessions, in small groups, with members needing to pre-book and follow social distancing guidelines.  These take place on Mondays and Wednesdays and include road runs and targeted speed sessions.  All sessions are conducted in accordance with Covid guidelines.

Additionally, the club is continuing to give support and encouragement to members via weekly Zoom meetings and challenges.  These have included 1 mile, 5k and 5 mile challenges, and monthly mileage targets.  Online social activities such as quizzes have also taken place,

As part of the Virtual Istead Zoom sessions held throughout lockdown, the club has organised a number of guest speakers.

One of these, to mark International Women’s Day, was Katie Holmes who talked to us about the history of women’s running.

It seems incredible now, but distance running was not open to women until the latter part of the last century.  In the  UK women were not permitted to compete in road races longer than 6 kilometres until late 1975.  Kathrine Switzer gained fame by entering the 1967 Boston marathon in the name of K. Switzer.  When it was discovered she was female, the race director tried to push her off the course and subsequently disqualified her.  It was not until 1972 that she was able to run the Boston Marathon legally.

Katie’s website https://runyoung50.co.uk/  has some fascinating stories about women’s running and is well worth a look .

Katie is particularly passionate about running for older women and following on from the meeting, she invited Istead Runner, Joyce Bell, who took up running in her early 60s, to write a piece for her website.  This is her story – https://runyoung50.co.uk/joyce-bell/

As part of the series of virtual challenges set by Istead throughout the various lockdowns, a virtual ‘mob match’was organised between Istead and  Dartford Harriers.

The challenge was to run a 10k during the week of 22nd February.  It was agreed that scoring would be on the basis of age grading, with the top 60 runners from both teams scoring  – 60 points for the highest age grade down to 1 point for the 60th.   Additionally all runners scored one point for their participation.

Thanks to a concerted Facebook campaign to get as many runners as possible out,  Istead fielded an impressive 76 runners – with some runners returning from injury  walking the 10k to ‘earn’ their one point.  Dartford fielded  33 runners.

The two clubs joined a virtual Zoom meeting on 1st March, when the results were unveiled.  Some very impressive age grade scores, together with the ‘strength in numbers’approach, resulted in a win for Istead, with 1035 points, against Dartford’s 795.

It should perhaps be noted that the 10k distance favoured Istead, who specialise in road racing, over Dartford Harriers , who are predominantly a track club.  In recognition of this, Dartford have challenged Istead to a re-match over 5k, hopefully to take place when we can compete face-to-face rather than virtually.  The result may well be different, but for now,Istead can bask in its glory! 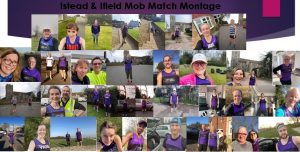 Istead club members were encouraged to wear club vests – a rare outing for them with no ‘normal’ races!